Eik en Linde is an age-old café in the Plantage neighbourhood of Amsterdam.

The first Eik en Linde was located on the corner of Plantage Badlaan and Plantage Franschenlaan. The old location is still standing today, now in the center of Artis as the “The Wolvenhuis”. The outside wall of the Wolvenhuis has a plaque reminiscent of the illustrious first Eik en Linde. From 1834 onwards, a large number of advertisements appeared in the Algemeen Dagblad calling for concerts.

Since 1967 Eik en Linde has been located at its current location at the Plantage Middenlaan 22 in Amsterdam. On the ground floor is the well-known spacious café with a view of the Middenlaan on one side, the other side offers a view on the beautiful backyard. 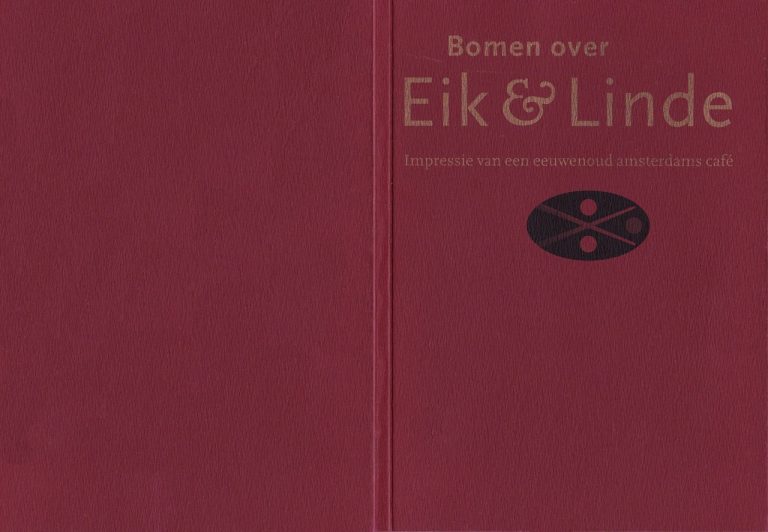 Read more about the history of the café in the booklet:

In Metamorphoses Ovid describes how Zeus and Hermes, disguised as vagrants, travel through Phrygia. In their path they meet nothing but trouble and closed doors until an old couple Philémon and Baukis, who live in poverty, hand them hospitably. They provide the travellers with food and shelter in their humble hut.

When Zeus later sends a flood over the land, he saves the couple and their hut, which he turns into a beautiful temple. After a life of service die Philémon and Baukis simultaneously at their own request. They transform into two trees on either side of the temple: an Oak and a Lime.

It may be to much to call Oak and Lime as old as Ovid, but it certainly has a rich history. It started out as a tavern in what is now Artis. On the outside wall of the wolfhouse is a plaque reminiscent of this illustrious, first, Oak and Lime.

Later the café moved to the Plantage Middenlaan, where it eventually settled at number 22 in 1967, via two other locations.

Despite all the metamorphoses that the beverage room underwent, one phenomenon has never been affected: the atmosphere. Relaxed, tolerant, solidary and committed. A living room for many with the difference that there is a billiard table in the middle. A game of checkers or chess, catan, toepen, blabbering, a game of ‘shooting balls’ on the green table or a good conversation; everyone has his/her reason to hop in. Tourists and day trippers combine a visit to Artis or a museum with a nightcap in Eik en Linde (or is it the other way around?).